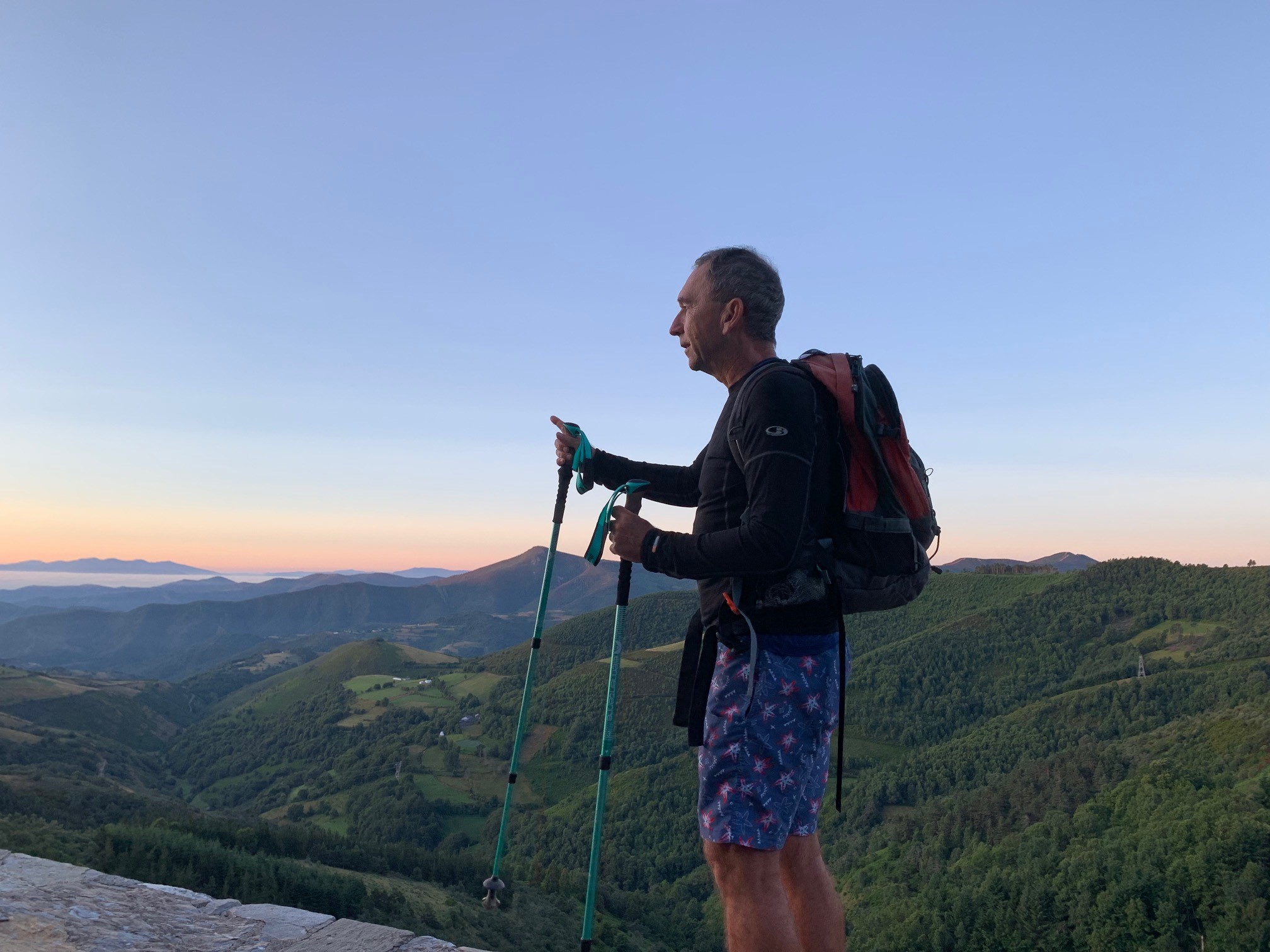 It’s certainly not all work and no play here at PKF Hamilton! We all work hard and we recognise it’s important that we all have time for the things that are important to us outside of work. My wife Jean and I are passionate about travel so it was much anticipation that we looked forward to our five-week trip to Europe recently to walk the Camino de Santiago.

Here’s a rundown of how the trip went!

Our journey began on June 15 and after 36 hours of travel we finally found a bed in the beautiful city of Bayonne – a beautiful old medieval city that has been redone. The next day we took the train to St Jean, the start of the walk.  Again, this is a lovely old city and we spent a bit of time exploring it and looking at the architecture and the people.

The next day was the start of the walk where we were confronted by the Pyrenees Mountains.  The path was long, but not overly difficult.  It followed rivers and was reminiscent of New Zealand in the first hour before climbing up through forests and following the contour of the land and the rivers.  After about five hours of walking we reached the hamlet of Roscenvalles in Spain.  We bunked down in an old, but refurbished monastery.

Every day after was walks of about 25km along magnificent countryside, so different from New Zealand.  The most striking things are the countryside and the people, who are very hospitable.  The history is amazing; to think that you could be walking the paths that Napoleon’s army walked on.

After three days of walking we spent two days in Pamplona, famous for the running of the bulls. Unfortunately, we were two weeks too early for that event.  The city was started by Pompei in the year 70BC. 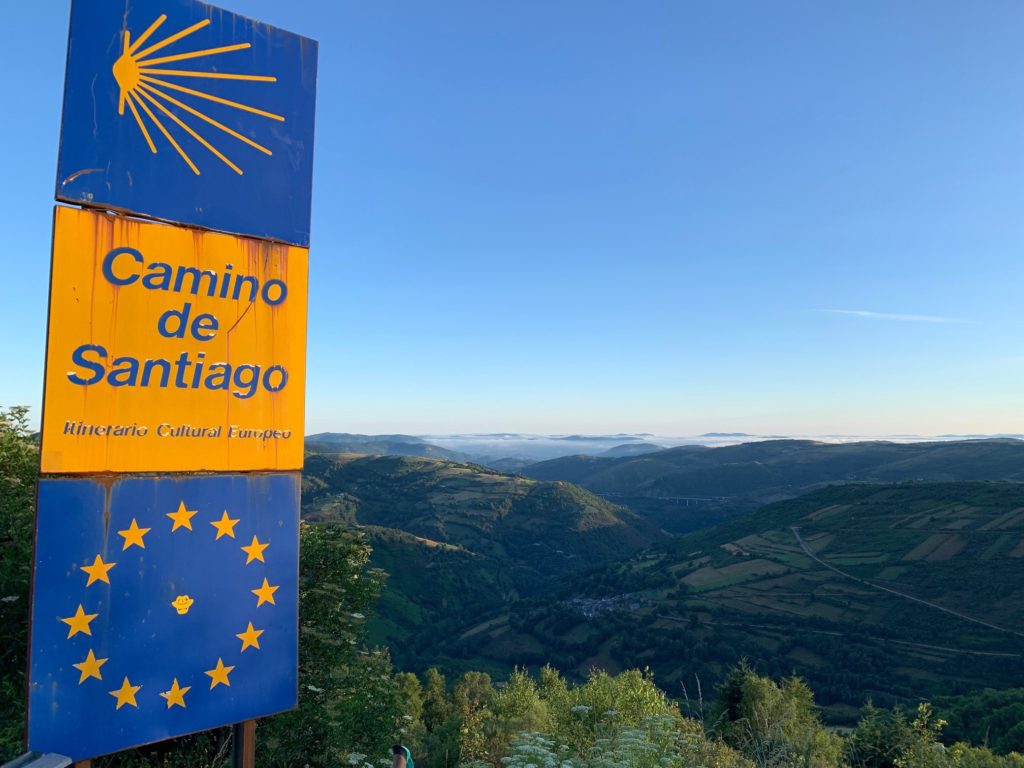 Week two saw us enduring the heatwave that hit Spain and the rest of Europe, so we had to change our way of walking drastically. We began each day at 5am and got through two hours of walking before the sun rose. It was a cool 17 degrees to start with, but it soon got up to 38.  By the time the sun was at its highest we were ensconced at our destination, having lunch at 2.30pm and the customary siesta thereafter.

It was even more relaxing another week in, being able to shut out the daily chores of life and to be able to focus on seeing birds, butterflies and caterpillars.

Week three and we had covered just under 400km, with another 400km to go. By now we were battle hardened, with feet that were likes of blocks of steel and a few blisters in between.

Life was very different this week from the previous two weeks in that we had been walking along the Meseta – the great Spanish Plains. These stretched for miles and it was almost like walking in desert-like conditions, seeing mirages and thinking that there was a village. Or worse, seeing an actual village and realising you still have 10km to get to that village!

The path followed the road in many instances with very little shade and as a result your mind starts wandering.  In fact, the wheat fields blowing in the wind were reminiscent of Donald Trump’s hairstyle, that’s how desperate my mind had become!

I also made a new friend. From a passionate dislike for windmills in New Zealand, I now see them as a great beauty in Spain. You can’t help but see great clumps of windmills at the crest of the hills on some days. These are a great way of creating sustainable electricity in the country. Early in the morning, when we start at 5am, they glow like diamonds and sparkle in the sky. When the sun shines on them in between the clouds, they look like flower bouquets.

We stayed in some amazing accommodation in quaint little villages, many dating back at least 200 years. Despite many of the villages being rather small, their local churches were anything but. The influence of the Catholic Church in the early Spanish days was significant; with every village we came to having between one and five churches, all competing for an ever-diminishing number of faithful.

But it wasn’t all just small villages. We stayed in a large city called Burgos, which has about 180,000 people living in it. We thought we were very fortunate getting an apartment right next to the Cathedral where we could almost touch it.

The Burgos Cathedral is world renown – one of the top cathedrals in the world and an impressive piece of architecture. We were also very fortunate to arrive at the start of the feast of St John and St Peter. This is a week-long festivity which attracts people from all over the world.  What we didn’t realise is that the fireworks would start at 11.30pm, well after we had gone to bed.  We woke with a startle thinking that we were being ambushed.  The Spanish are generous with their fireworks and these continued well into the next day.  After they finished there was no sleep to be had as all the people continued to drift home until 5am, when we were starting on our walk.  Life in Spain definitely starts late in the evening and finishes late in the morning! 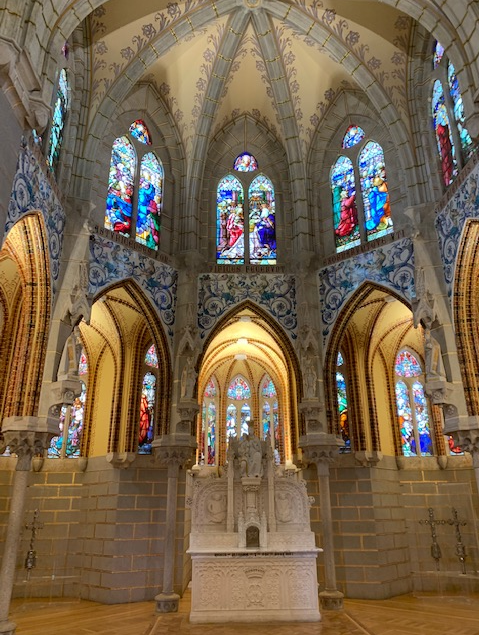 The food is fabulous.  We haven’t eaten as much fresh seafood as we did in the middle of the Spanish countryside.  It was quite impressive how lovely the seafood was and how well the Spanish prepare it.  We have also had local food including Castilian Soup – a paprika soup with whatever bits of meat that they couldn’t serve anywhere else floating in it.  A black sausage was a great highlight and very tasty.

Fortunately, the heatwave finished, and the top temperature then hovered between 30 and 34 degrees.  Sensibly though we made sure we still left early in the morning and were ensconced in our accommodation by noon each day, giving us plenty of time to get ready for lunch which starts about 2.30pm, and a siesta after that until 6pm when things start moving again.

By week four we were just 240 km from the end in Santiago having already walked 560km. It didn’t feel like we had walked that kind of distance.  It is amazing how when taking small steps at a time a journey doesn’t feel as long as it is.

Week four wasn’t the highlight of our walk as the scenery was flat and dry except for the occasional big field of sunflowers that brightened the environment.  The paths seemed to go on endlessly in a straight line and much of it followed the main road on a dirt path with trucks whizzing by.

Since Leon, however, we were back into rolling hills and lots of variety in the fields – sunflowers, barley, maize and other crops including home grown community vegetable gardens. And my friends the windmills have made an appearance again.

Lunch became a focal point of the day with us having started our walk at 5am most days. We really looked forward to trying the Spanish cuisine each day. We were fortunate by week four to have got off the main cafes on the squares and to have found where the local people have their lunch. The places look nothing special from the outside, but inside have an amazing set up and the quality of the food is superb.

One day we stopped in a Michelin-recommended restaurant and had a Maragatero lunch. This involved starting with some tomatoes in olive oil, then moving on to a dish with 10 different meats including pigs’ ears, pigs’ trotters, and blacking pudding made of chorizo and animal entrails. Actually, very delicious! The rest of the meal was followed by cabbage and chickpeas (surprisingly tasty) then a broth and finally puddings.  We managed to taste and eat everything! Because of the history of the food it made it an amazing meal to be had and it was all washed down with some really good local red wine.

The Spanish wines are either drunk very young (within a year) or cellared for about five years before coming on to the market. The young wine which hasn’t been drunk within the year is considered by the locals as undrinkable.  There is a festival (there are lots of festivals in Spain!) where the wine that hasn’t been drunk in that year is used in water cannons and splashed around. Instead of a water fight there is a wine fight!

Incidentally, in the past, wine was considered safer to drink than water and nearly every rural family made their own wine and stored them in underground chambers known as bodegas.

We had our toughest day during week four when we climbed to an altitude of 1500m, though that was followed by 20km downhill.

We treated ourselves this week to a relaxing evening in one of the few fancy hotels that we stayed at. This one had a spa and we spent an hour wallowing in the water being pummelled by water jets on our backs and legs – a treat for weary muscles!

Our last week saw us end up in the beautiful little village of O’Cebreiro, which is made entirely of stone, with thatch and slate roofing throughout. Historically it was a hospital stop for pilgrims and was known for its enormous quarry of marble limestone. In the past, Pilgrims that made it this far and who were healed in the hospital were then expected to lug a piece of stone all the way to Santiago, another 160km from here, to help build the cathedral in 100AD. Every pilgrim that attends the mass in the church is given a stone to commemorate this historical feat.

The countryside had by now changed to rolling hills, with patchwork farming and for the first time we saw livestock, as well as chicken farms and piggeries.

Farming in the mountains of Spain is quite different from New Zealand. The livestock farms are small, with a herd typically being about 20 cows, most of which look like jerseys. The cows are housed inside barns which form part of the house and are often underneath the house. This meant that every time we came to a village, we were assailed with strong animal odours and it took a few minutes to get the nostrils used to this before continuing through the village.

Personally, I think if I was a cow, I would prefer to be one in Spain rather than New Zealand as you have indoor accommodation and you have food on tap without having to go and look for it. Having said that, cows are curious creatures and we saw a number reaching out into the trees to eat the luscious green leaves.

We were soon in the province of Galicia, which is known for its tough people and its seafood, with octopus being the speciality. The locals marinate and then grill the octopus and serve it with boiled potatoes. The calamari was also beautifully prepared and very tasty. 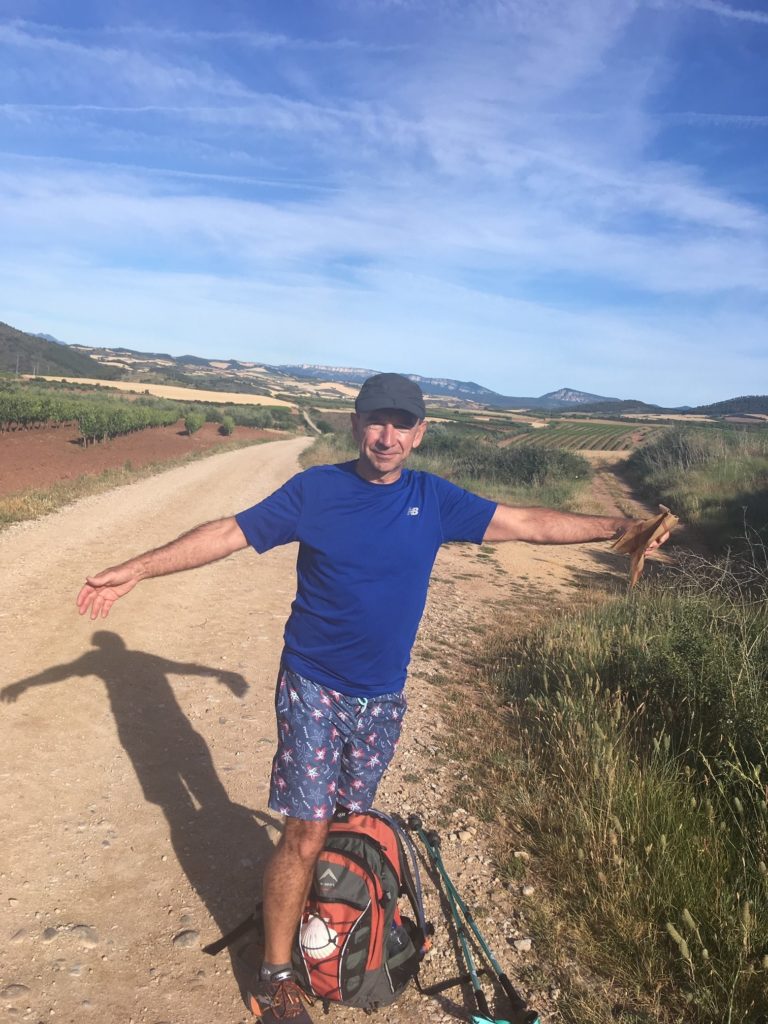 Four more walking days saw us reach the end of our walk in Santiago De Compostla. And I mus say, it felt like rather an impressive achievement!